Can you ID this machine?

I came across this old machine. I can get it for, well, lets just say, cheap. Like cheap enough that I can't really afford not to buy it. But I can't ID it or find any info on it. Any chance anyone here can tell me what it is? What it's worth, how well it works, whatever.... Thanks in advance. 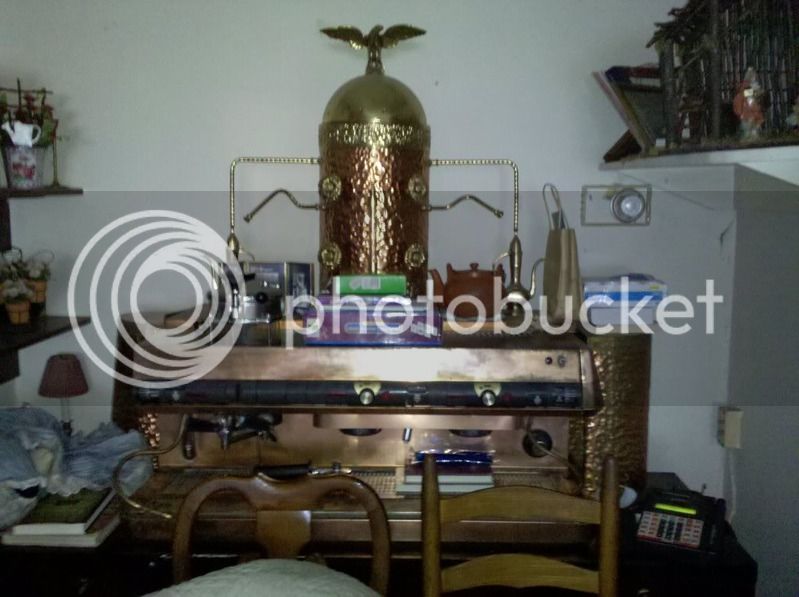 Can't really say what it is just by that pic... I have seen pics of different brands with that sort of eagle sitting on top. I think the entire top of the thing is just decoration, then from the warming tray on top downward is the actual machine. Could be an Astoria among others. Is a rather large machine... what will you be using it for if you decide to buy it? Can you check it out in person to make sure of the working condition? Just too many "ifs"... Later!
OP
N

Thanks for the reply. I have checked it out in person, several times. I know the owner well and the machine is local to me, I'm not buying site unseen. It is big. I'd guess 4 feet wide or a little more. 2 feet or so deep. Very heavy, at least a 2 person lifting job. The thing on top appears to serve some function, but I don't know what. It was working and functional 12 or so years ago. Hasn't been used since. The owner used to be a honcho at Olive Garden, apparently, the machine is the one they were installing in all their locations. It hasn't been used in years, but was serviced just before being stored. So the only issues with it would be ones caused by lack of use. That said, the machine doesn't need to work, really. I mean, it would be cool if it did, but for the price I'm paying (not much) it's fine with me if it's only a decoration. But if for not much money, I could use it to crank out a single shot once in a while, that would be neat.
OP
N

Really? No one can ID it? When I attached the last pic, it got cut off. Here is the whole pic, resized:

100% its not a CMA machine (Astoria, San marino, Wega etc) I will look through our company machine profile folder and let you know what I find out. The dome on the top is a red herring, many companies offer decrative domes for machines.

OK, id'ed from our book and had a bit of a search on the net to confirm. Its a Gaggia- see the link pictures below:

Bit difficult to see in your photo, but the big rounded sides give it away in the guide I have- which has pretty much the same picture as the one you posted. Yours has a built in bulk coffee maker on the left hand side, thus pushing the 2 groups a bit close on the right hand side of the machine.

Looks nice all polished up!

I used a Gaggia like this one when I became a barista back in 89! I was the schmuck that was responsible for keeping it shiny not an easy task! The thing seemed to be ancient back then...for some reason I seem to remember a plate on it that said ABC on it...is there any plates or markings on this machine?
You must log in or register to reply here.