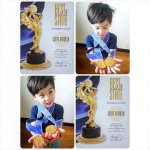 We are continuously inspired to achieve excellence in our craft by the people we love.

I love making coffee, I love roasting coffee... but teaching our son about the importance of improvement, dynamic innovation, and the desire to be the best at your chosen craft motivates me. Respect is something you earn through proven achievement and sustained excellence, and it's an honor and a responsibility I take seriously to pass that lesson on to the next generation.

We've been making coffee for 13 years, and in 2007 and 2009 we tried for Best of State... and it wasn't to be. And it's because the first criteria is proven excellence, and it's funny, but we had to get national recognition along with a host of local articles before the committee felt we should be considered. I was fine with that. As "coffee" wasn't even a category to be nominated for, the people who were not coffee people had to understand that we were operating on a totally different level than everyone else. We couldn't just say it. We had to demonstrate it. And THAT is what I think is important to teach our son. Don't settle. Don't be satisfied with just being "ok". Know what it feels like to not make it, know that not everyone deserves a trophy...and then get better, become more skilled and never stop improving--And in 2013, 2014, 2015, 2016 (twice), and this year as well, the Best of State committee was gracious enough to recognize what we have done and what we continue to do.

I remember when your son was first born. Time is just flying by.

It's fantastic that you found ways to turn your passion for excellence into a valuable learning experience for your son.

Thanks for sharing it with us.

I remember when your son was first born. Time is just flying by.

It's fantastic that you found ways to turn your passion for excellence into a valuable learning experience for your son.

Thanks for sharing it with us.

Thank you for the kind words. [emoji106]
You must log in or register to reply here.

What is your Mindset?

The role of the artisan coffee shop