I am new to this board and wanted to post an introduction for me and my (and my partners) new export company from Thailand. I am a British citizen and have been living in Thailand for the last 2 and a half years. I have always enjoyed good coffee and I was pleasantly surprised when I discovered that Thailand has a very good, unique coffee bean in the northern regions. However, Thailand consumes the majority of its coffee itself and only a small amount is exported. So we saw our chance, contacted the farms directly and formed our company...

Which brings me onto the company. Our export company is called Tukgae Exports and we are based in Bangkok, Thailand. We are specialising in exporting single origin premium grade AA organic arabica coffee. It is shade-grown at 1300 metres from the north of Thailand in Chiang Mai, specifically in the Doi Saket region (Saket mountain). We believe that we have a truly unique bean with some very interesting characteristics. It has a sweet aroma and a very smooth, earthy body to it that I believe people will love like I do!

We are just beginning to export right now and are currently looking for buyers who we will be happy to send samples to. If you have any questions then please do not hesitate to contact. 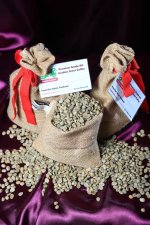 I love Bangkok, great foods and entertainment. I have been there more than 20 times. I used to have a lot of customers in Bangkok and used to hang out at MBK and Siam City tower areas at night and over weekend. Asia hotel was my choice due to very close location to everywhere :+) I have not been there for 4 years and hope that I will be traveling there soon.

we have couple of farms (micro lots) and an exporting company in Guatemala, but I am based in Long Beach, CA for international sales and marketing for the company.
We also have not been in business for long time and perhaps we can share ideas and information. Just send me your message via PM here.

hey Gareth,
by the way, can you explain about the coffee cultures and characteristics of Thailand coffees that you are selling?
You can get a lot of coffee information about Ethiopian, Kenya, Guatemala, Colombia...etc, but I hardly ever hear about Thailand coffee.
I am sure that it is wonderful and unique.

so, please let me and all other coffee forum members know about your coffee.
also, if you know some of the web link for Thailand coffee, i will appreciate it.
thanks
alex
OP

I have pm-d you already and have just seen your second post. I will try to answer any questions here of course

Our bean has a sweet aroma with a bold smooth tasting palate. It has an earthy texture to it and I find it a real joy to drink. It is shade – grown in the north of Thailand in the Chiang Mai region and is grown in Doi Saket (Saket Mountain) at the farm which has an altitude of around 1300 metres. There are many hot springs that vent in the area and the hills are heavily shaded by the tropical rain-forests creating a very rich, deep, fertile loam soil. This along with regional temperatures between 15-25 degrees throughout the year provides an ideal growing climate for the arabica coffee. On the mountain there is around 1900ml of rainfall and this is used to naturally water the coffee as well as water from the afore-mentioned springs and waterfalls in the area.

The beans subspecies is an original Arabica Catimor Chiang Mai 80 bean from Chiang Mai. Originally, then the ‘blue mountain’ subspecies from Papua New Guinea was brought in to Thailand to grow. However, when they first used the blue mountain subspecies then they had a lot of problems with coffee leaf rust. The King launched a further project to counter this and the Department of Agriculture brought in the subspecies 'Catimor'' from Portugal and developed the coffee genetics. They did this by combining the genetics H.W.26/5 and SL28. They called this derivative Catimor Chiang Mai 80. The characteristics of Catimor Chiang Mai 80 include a resistance to coffee leaf rust, a large yield from harvest (in 1 rai then they can pick around 215kg worth of beans), a grade A coffee bean after 5 years with a score of 81.3 – 87.3 (our coffee has been since rated as a grade AA bean), and also a taste level of 7/10 for the coffee bean.


Coffee culture in Thailand is very big, especially in the northern regions in Chiang Mai and to a lesser extent in Bangkok. There are hundreds of coffee stalls lining the streets here and more up-scale cafes etc Obviously being a hot country then iced coffees are very big here. However, in Bangkok and other areas in Thailand then the majority of coffee isn't great and only select cafe's supply the decent beans.

In the north and in Chiang Mai however then things are different. The good quality Arabica is grown in this region and unfortunately largely stays there but there is some really good coffee in the region. Arguably the best quality comes from Doi Saket and Doi Chang (Doi means mountain in Thai). The coffee culture in Thailand started when the King of Thailand started projects in the 1970-80's to encourage the hill tribes and farmers to stop the production of dangerous crops such as opium poppies. He encouraged the farmers to start to grow coffee instead and provided government assistance and training. From there then it has grown and is now a very good bean and in my humble opinion is being missed out on by people around the world.

great review of your coffee. excellent information. I got to research it bit more about Catimor Chiang Mai 80.

got some questions for you.
yo said that your farm produce 15 tons per year. that is 15000 kgs x 2.2 = 33000 lbs of coffee which is 90 bags short of one 20' container. I believe that one 20' container has 420 bags (one bag is 100 lbs).
My question is that since your farm produces very limited q'ty, do you also buy and sell from other farms in thailand for export purpose? or just sell the beans from your own farm?
E

hello Everyone,
Gareth from Tukgae in thailand PM these link for Thai coffee cultures and information.
i just wanted to share with everyone in this forum.

it seems like thai gov't made it very difficult to import other specialty coffee (or any type of coffee for that matter) from other countries.
one of the article says that the import duty and other related charge is 120% of coffee cost (besides shipping and handling from other countries).
when i was in Bangkok, they had hundreds of Starbucks everywhere, but the prices were about the same as USA or any other countries.
I wonder how Starbucks goes around the 120% import duty thing..... perhaps some special deal with Thai Gov't. you never know.

Anyway, i would love to try some Thai specialty coffee some day in Chiang Mai.
OP

Thanks for posting the threads up for me. I don't have enough posts to link them yet.

Thank-you. I have spent a lot of time collating all of the information and having it translated then re-writing it etc. Many headaches and long hours unfortunately but I think that I have some good information now.

At this moment then it is just from the one far. We represent the farm but do not own it. There are options available to contact and get other farms in the area on board of course but we thought that it would be better to start small and test the waters as it were. Is this the wrong approach?

Yes, the Thai government has made it very difficult for speciality coffees in Thailand (other than their own) and unfortunately I think that this is stunting the growth in the region as the majority of the coffee as stated is consumed by people in Thailand. As far as starbucks then with the Thai government there's always ways to get around the rules and restrictions (usually in the form of a large payment to themselves) and gain an exemption. It would not surprise me if this is the case here.

It is really worth a visit. I don't know if you've ever travelled up north in Thailand but Chiang Mai is a very quaint city. All of the amenities of a city but with a town feeling. Lots of nice little cafes to sit and relax and try some speciality coffee at in the city (for very cheap too) and lots of temples in the centre, waterfalls etc. It really is a nice place to visit.

Thanks to all for the informative posts regarding the coffee culture in Thailand.
Gareth, keep up the hard work. The cupping scores of 82-87 is impressive.
Welcome aboard the forum!
E

JumpinJakJava said:
Thanks to all for the informative posts regarding the coffee culture in Thailand.
Gareth, keep up the hard work. The cupping scores of 82-87 is impressive.
Welcome aboard the forum!
Click to expand...

Hi JJJ, this is ensoluna. I am not familiar at all with any coffee from Thailand. I have been trying to find any internet company who sells some great thailand coffee (green or roasted). since you are more keen on USA market, perhaps you can recommend any good company where I can buy some great Thai coffees? that is one of few that I have never tried.
BTW, are you a roaster, JJJ?
OP

There are some who export Thai coffee already (but not many) and I have attached a link below. Alti coffee do a really nice blend from the different mountain regions in Thailand but I do not believe that they do a single origin coffee. Their website is below:

Thank-you for the warm welcomes to the forum. JJJ, right now I am trying to get Thai coffee more well known as the quality producer that they are and thank-you for the encouragement.

Gareth
Tukgae Exports
You must log in or register to reply here.

Anyone Who need Coffee beans or Ground Coffee from abroad

I
Greetings from Indonesia