It’s the world’s most expensive coffee, and it’s made from poop. Or rather, it’s made from coffee beans that are partially digested and then pooped out by the civet, a catlike creature. A cup of kopi luwak, as it’s known, can sell for as much as $80 in the United States.

Found in Southeast Asia and sub-Saharan Africa, the civet has a long tail like a monkey, face markings like a raccoon, and stripes or spots on its body. It plays an important role in the food chain, eating insects and small reptiles in addition to fruits like coffee cherries and mangoes, and being eaten in turn by leopards, large snakes, and crocodiles.

At first the civet coffee trade boded well for these creatures. In Indonesia, the Asian palm civet, which raids commercial fruit farms, is often seen as a pest, so the growth in the kopi luwak industry encouraged local people to protect civets for their valuable dung. Their digestive enzymes change the structure of proteins in the coffee beans, which removes some of the acidity to make a smoother cup of coffee.

But as civet coffee has gained popularity, and with Indonesia growing as a tourist destination where visitors want to see and interact with wildlife, more wild civets are being confined to cages on coffee plantations. In part, this is for coffee production, but it’s also so money can be made from civet-ogling tourists. 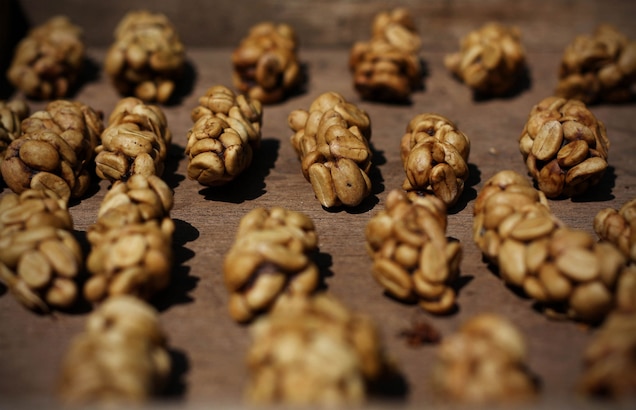 Civet dung, studded with partially digested coffee beans, used to be collected from the wild. Increasingly, civets are instead kept in cramped, unsanitary cages on coffee plantations.