New "Toy" arrived! . . . Help Please: The loader was not included

I roast manually so fancy software does nothing for me. The Lorings have inseparable heat and airflow and I roast some coffees with more airflow than others so that was out. I almost bought Hearts '58 UG15, but waited too long and it sold a week before I decided to buy it. I found a '56 UG15 in NY, but it cost too much for what it was. New K&Ms are nice, but a bit pricey and 8-10 months for delivery.

BTUs were an issue on most. I'm used to being able to get 10# of coffee from room temp to 415* in 8 minutes. Not that I do that all the time, but I want that kind of power. Some roasters needed 20"wc incoming pressure in order to roast their rated capacity in 15 minutes!. No bueno. It was starting to feel like a Seinfeld episode.

I had given up on San Franciscans early on because new ones are fairly expensive and they have a buy back program to refurbish used ones, so they don't come on the market often.

Then this SF-75 popped up on eBay. It is bigger than I was looking for, but it was listed as a no-reserve auction and I couldn't resist throwing a number at it. Well...I'll be picking it up in a week or so. Fortunately, it's only 3 hours away. 2014 model, just serviced but being taken out of service and replaced for a CF-70 with double the capacity. I can't wait to tune it in and make it mine. 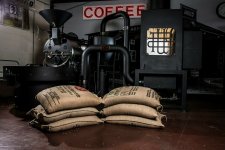 Congratulations! Thanks for sharing pictures of this Beast (Beauty?)!!
M

Did I read correctly . . . you went from a 5kg roaster to THAT? Kudos on your serendipitous purchase but I sure hope you've got a lot of coffee drinkers lined up to handle the output :coffee1:x about 10,000

Congrats!! Are you keeping your 5k for smaller batches?
OP

topher said:
Congrats!! Are you keeping your 5k for smaller batches?
Click to expand...

The 5kg is set up in a commercial kitchen in my garage. It's both super convenient and super stifling. I spend most of my time at the coffee bar during the day and I can't have a roaster there. So it's nice that I can get some roasting done in the evening. But it limits the roasting side of the business to just me. I'm leasing a 1200sqft space near my soon to come coffee bar #2 and will be able to hire help and expand.

i'm keeping the 5kg status quo while I get the new roastery set up. Hopefully this will allow for a smooth continuation of business. When I'm ready to move over full time to the new place I'll have to decide what to do with the 5kg. It took a while, but it's really dialed in well and the coffee is consistently great. It would be hard to give it up.

expat said:
Did I read correctly . . . you went from a 5kg roaster to THAT? Kudos on your serendipitous purchase but I sure hope you've got a lot of coffee drinkers lined up to handle the output :coffee1:x about 10,000
Click to expand...

I'm roasting 10# batches now with 10 different origins. Along with pairing down the variety a bit, I'm also planning on setting up the beast to be able to hopefully roast down to 12-15# batches with good Artisan data. It's 300,000 btu which should do 60# with the power I need. I was looking for a 15kg, this one is effectively 27kg. But for $36K, as long as I can roast 1/4 batches, I'll be in my wheelhouse and have lots of headroom to grow.

From past experience you will kick yourself down the road if you get rid of your 5 kilo. I sold a 2.5 that I had 17 years ago...Still kick myself for letting that one go!
OP

topher said:
From past experience you will kick yourself down the road if you get rid of your 5 kilo. I sold a 2.5 that I had 17 years ago...Still kick myself for letting that one go!
Click to expand...

I won't. If nothing else, it will be prudent having a back up.
S

Congrats. At first I thought it was a 75 kilo and I thought that's a huge upgrade but 75 lb capacity makes much more sense. I'm sure you'll love the new roaster!
S

Supposedly, the loader was not included with the sale of this roaster. Anyone have any clue as to who makes it and how much one would cost? 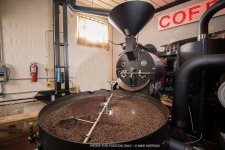 At my last place I had a loader for my 60 and 120 kilo roaster. They made such a mess! I still have the 60 kilo at my new(of almost 10 years) place. I went without a
loader. My space is so tight I do not have room for it and really hate the mess it makes. I Load 3 buckets at a time, 33 lbs per bucket. It is a good work out and really isn't that hard. 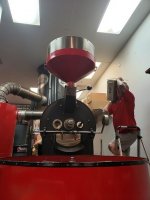 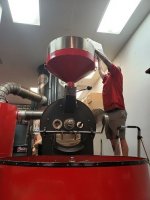 That's what I wanted to hear! I was more worried about the height than anything else, but I nice little step ladder would do the trick. I'll probably be roasting 20# batches to start, but when I need to do 60, two buckets of 30 is not that much to ask. Muchas gracias!!

No worries! How the loader worked at my last place was you put the coffee into the loaders box. You turn the fan on(and the noise is deafening) you then wait till the fan is at full speed and you then open the box. The coffee drops into the pipe and the fan blows the coffee to the hopper. With all that air it knocks off chaff and dust. The mess is horrible and also the dust could become an issue if you have a fire. It basically would be like flash paper on top of a fire. Hope that made sense.
OP

I've seem some that work with a vacuum pulling from the top instead of a fan pushing from the bottom. That might alleviate the debris. I'd prefer a simple conveyor system.

Update: So I just found out this loader is the conveyor type. It has little buckets that operate on a chain and load the hooper. Very quiet. No mess. Takes about a minute to load 60#.
Last edited: Jun 17, 2020
You must log in or register to reply here.