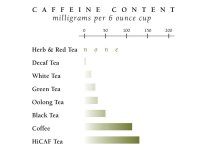 How much caffeine is in tea? This is a common question, particularly among tea drinkers who have concerns about how the caffeine content in their tea will affect them.
Does your tea contain enough caffeine to give you a nice, clean burst of energy in the morning, or help you to overcome the midday slump? Or will it leave you feeling jittery, anxious, and overstimulated? Will it keep you from falling asleep at bedtime?

These are all valid questions, but it may surprise you to know that there is no single “right” answer to them. The truth is, the amount of caffeine in tea depends entirely on the variety of tea leaves. In the sections below, we’ll help you understand how much caffeine is found in your favorite types of tea, along with other valuable information about tea and caffeine.

Caffeine is a mild stimulant that occurs naturally in several plants, including Camellia sinensis. This is the plant that is used to steep black, oolong, green, and white teas, meaning that all of these varieties contain some amount of caffeine.

Caffeine has been shown to affect energy levels, mood, stamina, the vascular system, the digestive system, and other functions within the body.* In fact, many people choose to consume caffeine for its ability to clear the mind, lift the spirit, and banish fatigue*.

For some people, it may be possible to consume too much caffeine. Overindulgence in caffeinated foods and beverages can lead to symptoms like irritability, anxiety, and insomnia. For that reason, it is important to know how much caffeine is in the foods and drinks that you consume and monitor your consumption.
Relate Article About Caffeine

How Much Caffeine is in Tea?

Herbal teas (also called tisanes) such as chamomile, hibiscus, and peppermint teas are naturally caffeine-free. One exception is yerba mate, which contains around half the amount of caffeine per cup found in a similar-sized cup of coffee.

Unlike herbal teas, decaffeinated teas are NOT naturally caffeine-free, but rather have had their caffeine content removed through a specialized process. The Republic of Tea uses a natural CO2 high-pressure extraction process employing carbon dioxide, which is highly effective at removing the caffeine without compromising the flavor, color, quality, or other beneficial components.

It’s also important to note that not all of the caffeine can be fully removed from decaf teas; typically, a very small amount (such as 2-4 milligrams per cup) remains.
For those who prefer a higher dose of caffeine for a strong burst of energy, consider high caffeine teas, which contain even more caffeine than a similarly-sized cup of coffee at approximately 116 milligrams per cup.

Additionally, tea is unique compared to other sources of caffeine (such as coffee) due to the fact that it contains L-theanine, an amino acid that produces a calming effect.* The caffeine found in tea is also thought to be absorbed into the body more slowly than the caffeine found in coffee.*

This may be why many tea drinkers describe the energy benefits they receive as a calm, steady, gentle alertness, without jitters or afternoon crashes.

In other words, consuming up to 6 six-ounce cups of black tea per day, or as many as 10 cups of green tea per day, still falls within the “moderate” level of caffeine consumption, as per the FDA’s guidelines.
However, it’s important to remember that your body’s reaction to caffeine may differ from the norm, or that you simply may not enjoy exceeding a certain intake level, even if it is “generally recognized as safe.” Always monitor how you’re feeling while consuming caffeine, and over time you will learn how much you feeling comfortable consuming on a daily basis.

Aside from the type of tea you are steeping, there are a few other factors that will determine how much caffeine ends up in your cuppa. Using hotter water and steeping the tea for longer will extract more caffeine from the leaves.

Additionally, the smaller the leaf, the stronger the extraction of caffeine. Using comparable amounts and steeping times, a tea bag filled with cut leaves will release more caffeine per cup than full-leaf tea.

As you navigate our website, http://www.ateaset.com, you will find details of each tea’s caffeine content presented with the tea. Caffeine content varies with manufacturing and growing variances as well as brewing conditions and time. Values are approximations.

*These statements have not been evaluated by the Food and Drug Administration. This product is not intended to diagnose, treat, cure or prevent disease.
Last edited by a moderator: Mar 27, 2021
S

i dont think so
G

This is a great thread. Thanks for this! I drink chamomile most of the time, but mix it up when I want some caffeine.
J

Thank you for the article.
K

Thanks its a great information
A

Thanks for the info!
G

I drink white tea every day. I've tried a bunch of different types and I couldn't notice any significant differences. That's why I don't buy the most expensive ones any more. Most unflavored loose leaf white teas are ok with me. Here's a detailed article I found explaining the amount of caffeine in white tea with its history and health benefits

I have a preference for peyote tea. It tastes horrid but man does it have something that reeeeeaaaaaallllllllly kicks things up a notch. And it's cheap. I go outside and there it is. Everywhere.
L

i dont think so
R

If you are sensitive to caffeine you´ll have to try tisanes when it gets too late for green tea...

Оne could try some like peppermint, rooibos, honeybush, chamomile and hibiscus...there´s some nice high quality loose herbal tisanes out there so you don´t have to settle for tea bags in the evening. This article is pretty informative https://betterme.world/articles/butterfly-pea-flower-tea-benefits-side-effects/
Last edited: Jun 27, 2022
You must log in or register to reply here.

A
How you can control the caffeine in your cold brew coffee?

How Much Caffeine is in a Cup of Coffee?
2