does anyone have any information that would suggest a connection b/w caffeine and joint pain - arthritis related on not. i haven't been able to find any myself, but have been experiencing some pain in my wrist. cutting back my caffeine intake has seemed to effect a significant decrease in my symptoms.

Caffiene and joint pain: Here's why!

I have arthritis in nearly every joint and throughout my spine. I also love good coffee! Coffee/caffiene is known to cause dehydration, from excessive urination. Less fluid in joints can increase pain, but can also help reduce pain, during periods when I have joint swelling. I definitely have more joint pain when I don't supplement with pure, filtered water. However, I also notice that drinking coffee with arthritis and pain meds helps increase the overall effectiveness of the drugs and makes them work faster. Good aspirin products use caffiene in their formulations, because it's a medical fact that caffiene acts as a carrier for the aspirin, making it enter the bloodsteam more effectively and go to work faster, as well. Next time you go shopping, check out the labels on several bottles of aspirin. The good ones all have the caffiene carrier! I'm speaking from years of experience and not quoting any medical journals! Just don't consume in excess. Moderation is the key, when we have arthritis or joint pain. Works for me! Best wishes.
G

Dehydration isn't from excessive urination. It's recommended you drink plenty of water per day, and what happens then? More urination.
G

Pain in Joints and coffee drinking

I suffer from early onset of osteo arthritis.

I noticed that the more coffee I drank, the more joint pain I had.

I started drinking a coffee with naturally low caffeine and ganoderma
mushroom extract. the result has been to be almost free of aches and
pains. I would recommend this to any one who loves coffee, but not the
effects it has on our body.

Allergies are capable of triggering jaw rigidity, and temporomandibular jaw dysfunction (TMJ). (3,4) Caffeine use is associated with bruxism. (5) Allergic reactions to caffeine cause TMJ, and bruxism."
Townsend Letter for Doctors and Patients
G

I am a very lucky 73 year old male who has no chronic pains and who is not on any prescription or over-the-counter drugs. I usually don't drink coffee, but I make 4 cups a day in the morning for my wife. Recently I started saving her coffee leftovers in the refrigerator since I found I like iced coffee. Normally, I would sip hot coffee, but I found myself chug-a lugging 8 ounces of the cold stuff in a few minutes.

Then I began to suffer very serious neck and back pain from what before had been temporary discomforts. (One night I was awake at 4 AM seriously considering going to the emergency room.) I would have to avoid further irritation of that particular pain for two days before it would abate. And then another injury would occur and I began to think my pain free days were over and that I had suddenly contracted arthritis. Remember I have been in good spirits and chronic pain free for 73 years. I was beginning to panic. The only thing I could think of to do was to quit drinking all that coffee.

And that was the end of it. I was back to my old pain free self
G

Coffee and back pain

I also have been fighting the coffee and back pain syndrome. I find that Coffee causes my back to stiffen and ache throughout the day. If there is some help for this coffee back pain relationship please let us know. I love coffee and quiting is turning out to be more than I want to deal with.
N

EDISON WA-Center of the Universe

Are you sure it's not reaching for the mouse while drinking coffee? Snicker ...just kidding ( iknow it's not a funny matter)
M

Well itsjona, as far I know coffee has nothing to do with joint pain. Over usage of Caffeine may lead to overweight and heart burn or digestion problems, but it will not affect joints. Join paints are caused mainly due to injury. Though food has some impact on muscle''s growth, its almost impossible to say that coffee weakens muscle growth.
F

hello john 631. interesting your note . . . i also have experienced relief from pain in my back and shoulders when i stopped drinking coffee for one week. i did get the expected head ache but it went away the third day. but . . . i started up again after that week. i love coffee. now i need to try again and see if quiting coffee once again has the same pain relieving effect on me. i am 51 and finish concrete for a living. pain is part of the deal. but maybe it doesn''t need to be quite the deal its been.
P

Thanks for the information. I didnt know that caffeine was linked to Joint paint. I normally consume a lot of coffee during the day and now to think about it I have neck, back and sholder pain, I always blamed it on the fact that I work a desk job. I need to cut back on my intake of caffeine.
T

So if I cut back on coffee, I wont become arthritic? Would paying "1 payment of $495.99" to that website you linked us to improve your overall wellbeing as well as reduce the pain of arthritis?

I think i know the answer to this question. Coffee contributes to the join pain because it is acidic, contains chlorogenic acid in high quantities and acids produce free hydrogen atoms, which causes pain.
Practically every drink in human diet is acid, except water. And it has to be not carbonated water , because carbonated water also is acidiic (ph 5-6),. Co2+h20 = H(+) + (+)HCO3 .

When u look at wikipedia website about PH http://en.wikipedia.org/wiki/PH u will see this graph 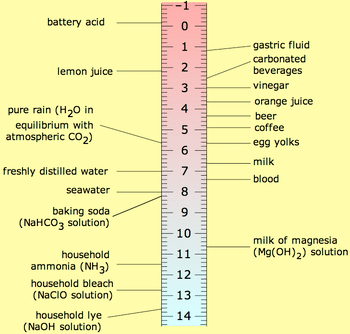 that ilustrates which drinks are acidic.

caffeine has it's role in accumulation of acid because it dehydrates U , and only thing that can remove the acid is water.

As if drinks are all acidic, the matter is different and more complex with food.

The acid slowly dissolves bones, is stored in fat tissue and cells causing inflammation.
To get rid of it one has to take water only and See salt which is explained by this website http://watercure2.org - created on the base of Dr Foreydoon Batmanghelidj's books.

coffee blocks opiate receptors, maybe this is why it increases pain

Opiate receptor-active peptide fragments (exorphins) have been identified recently in casein1 and gluten2 hydrolysates, and morphine has been found in bovine and human milk3. To determine whether similar peptides or alkaloids occur in other foodstuffs, we have screened potential sources using a rat brain homogenate assay to detect opiate receptor activity. We report here that instant coffee powders from a variety of manufacturers compete with tiitiated naloxone for binding to opiate receptors in the rat brain membrane preparations, with no significant difference between normal and decaffeinated coffee. The receptor binding activity resembles that seen with opiate antagonists, in that there was no change in the half-maximal effective dose (ED50) in the presence of 100 mM Na+; on bioassay, the activity was similarly shown to be antagonistic and specific for opiate-induced inhibition of twitch. Preliminary characterization of the activity reveals that it has a molecular weight (MW) in the range 1,000?3,500, is heat-stable, ether-extractable, not modified by enzymatic digestion with papain, and clearly separable from caffeine and morphine on TLC. As its concentration in an average cup of coffee is five times the ED50, these data suggest that drinking coffee may be followed by effects mediated via opiate receptors, as well as effects of caffeine.
Click to expand...

Caffeine is termed as a great body stimulant and it reduces of eases out the pain or heaviness in the head and other surrounding areas. Not sure about the Bone thing and arthritis. But Coffee gives us a great boost and gives us a sense of rejuvenation to say the least. You can read more about its properties online to get the right and accurate info.
You must log in or register to reply here.

U
It's incredible what a powerful drug caffeine is!

C
Why am I more tired the more coffee I drink?