Anyone use a milk frother? If so, what are some good brands to look into? Anyone try the AeroLatte? Thanks.

Are you looking for a small milk frother for your home?

I don't know about the Aerolatte, but I recently bought a Bodum Mousse milk frother for my sister and her family. She and her children tell me that it's easy to use, the cleanup is simple, and they love it. They especially like that it makes "smooth and consistent milk foam with the push of a button." It runs on batteries, which makes it easier to use either at the table or kitchen counter.

Here is the link to it if you'd like to check it out.

Thanks PinkRose but I was actually referring to a handheld milk frother such as the aerolatte.

I called a friend of mine yesterday, and I asked her if she knew anything about the Aerolatte hand-held frother. Because she buys all sorts of gadgets (from catalogs, Internet, etc.), I actually wasn't surprised when she told me that she has one.

She described it as "a handy little thing that really works". She uses it to froth up milk for all sorts of things.

One thing that she said was that the milk has to be cold in order for it to really froth up. It more than doubles in volume in the container that you're frothing in, so you should use a tall cup or bowl. Skim milk or low fat milk foams up best. If you froth it long enough, it looks like whipped topping. She makes it like that when she puts it on her daughter's hot chocolate instead of whipped cream.

You can make the cold milk froth first and then warm it quickly in the microwave before putting it on your coffee. If you warm it too much, it will go flat real fast.

It supposedly doesn't take long to get the hang of using the Aerolatte.
Just be sure you use a tall enough container, or you will splash the milk as you froth it.

Also be sure to put the end of the frothing wand into the milk before turning it on (or you will definitely splash the milk as you froth it).

My friend also uses the Aerolatte to get the lumps out of home made gravy, to blend instant hot chocolate mix with the water, and to scramble eggs before making an omlet....so if you don't end up using the Aerolatte to foam milk, you can always use it for other things.

I hope this helps.

PinkRose,
Thanks for your input, I'm sold! hahahaha. I'm gonna get one this weekend! Now my other debate, french press or areopress, by any chance does your friend have any experience on these two? I'm sure she has a french press but has she tried the aeropress? Thanks again.

My friend has a Bodum French press. I've never known her to use anything else. Actually, I just received one recently as a gift, and I really enjoy using it.

I don't think I know anyone who has tried the aeropress, but I'll let you know if I find someone.

I think I remember reading some postings on this forum about the aeropress. Maybe someone on this forum will let you know if they like it. 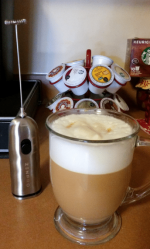 Hi cuppED. I use ZENPRO Milk Frother and it is absolutely amazing. It works realy well. Here's a sample of what my milk frother can do.
I purchase it at amazon: Robot Check

Why would anyone want to click on a link that says Robot Check on it?


This is the web address that I copied from the Amazon website. It looks safer.

Wow, I'm not sure what happened. I did post the link and now it says Robot check? But if I click on Robot Check, it goes to the website.
Thank you PinkRose for noticing. Yep, I purchased it from that link and I used this discount code: ZENPRO15 (code still works).

We use a NORPRO GLASS FROTHER, probably from Bed Bath and Beyond....looks something like a small french press...froth then nuke the froth..
4

I have a starbucks milk frother. works great and warms the milk up. I think there are a few frothers on amazon that work well too. Philz coffee (a small California roaster and chain) shake their milk to froth it. I've tried that in a mason jar --works well for a fast solution but you won't get microfoam. Heat the milk in the microwave first (of course without the jar lid on). Problem with handheld frothers is that the milk, if cold really cools down your coffee...

I started my home brewing coffee adventures on an aeropress. Best price is at world market when they have a sale on coffee equipment (like they have now) and you can add your coupons. Aeropress makes a strong espresso-like coffee. It takes manual labor (pushing down) and care (to make sure the cup underneath doesn't slip). It's not so easy to make large volumes. I also have a Bodum French press. it's a pain to clean the grounds afterwards. It really depends on how you like your coffee. Since it sounds like you want to froth milk... to make a latte or cappuccino, then I'd advise an aeropress as the french press makes "regular coffee".

Yup .... it seems that this old thread gets dug up every once in a while.

The milk frother topic comes up when people search for it. At least we keep on adding some new content to help make it useful to those who need input on milk frothers.

Why does Bed Bath And Beyond sells milk frother...I have always confused by this name. The name decodes to Beddings, curtains, pillows but are selling kitchen gadgets....Isn't it weird?

What part of beyond don't you understand? :grin:

peterjschmidt said:
What part of beyond don't you understand? :grin:
Click to expand...

The part "beyond" getting out of bed and taking a bath....
You must log in or register to reply here.

Looking for a automatic espresso machine