I've had this for just shy of 4 years, even though it is a 2001 model. It is in better condition then when I got it...much cleaner, and everything is lubed on schedule. I did replace the main bearing about a year ago.

It roasts as expected, full batches under 22min for dark. The cooler is excellent and is room temp in under 4 minutes.

I think the worst part of the design is that Ambex used a squirrel cage fan, rather then an impeller. It clogs...quickly. I swapped out the nuts holding it in with wingnuts, and had a plug spliced in so that it could be removed and cleaned in under 5 minutes.

I moved to a downtown location, and wanted to add a cyclone collector. I'll send the link where I got the unit (cheap), as I have use for it here still, and the size/shipping would be more then just getting a new one direct. What I will include are the 3 pieces I had made from a local welder. These include a block off plate to cover where the factory fan location. A take-off plate the replaces the stock clean out, and a mounting unit to move the fan to the top of the cyclone. I went overkill, and it's bigger then the roaster itself. I did see a little drop in airflow, but had a 40' stack on top of it.

I started off small, and then added a coffeeshop in front of this. I'd find myself roasting 3-4 batches of espresso at a time, plus the other 12 varieties we had, 3-4 times a week. Time to go bigger since I roast after hours. 4# is a sweet spot, 5# is no problem, I've done 5.5 a few times and it works at lighter roasts-you'll see color variation on anything darker.

Simple controls, no automation. I could set and forget this thing and walk away for the first 12 minutes and know where it was every time. Love the unit, and it's a shame what happened to Ambex as a company. I've met and talked with most of the original players over time.

Attaching 5 pics. If I remember, there is a scuff under the cooling tray on the backside, and one of the rubber feet don't match. You can see the factory fan sitting on a cyclone in one of them. It will be reset back to stock on shipping, and I will include the parts. 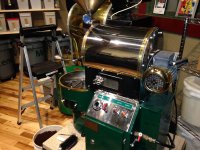 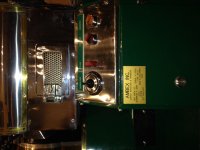 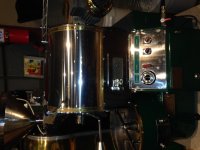 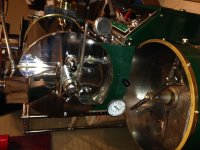 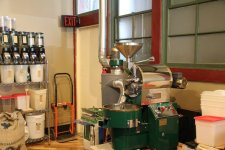 Thing looks awesome...wish I never sold the one I had. Do us a favor when it does sell can you please post that it is sold? Thanks and good luck!
T

Can you explain a bit more how you modified the fan? By my understanding you kept the factory fan and modified the squirrel cage to make it easier to clean - and you also moved it a bit higher. Or did you change the fan to an impeller?

Also, is it natural gas or LPG?
OP
G

The entire factory fan and cage blower is held in by 3 bolts. I pulled the unit out from that spot, and blocked off the hole it left. I replaced the clean out plate on the back of the unit with a take-off plate. The 3rd piece was a mount that sat between a cyclone collector, which allowed the fan unit assemble to bolt up directly to it.
I have already moved the fan back to it's original location, but will include the 3 pieces I had made, along with info on which cyclone I used. I won't include the cyclone I used itself, as it would double the shipping dimensions, and I have further use for it. It would probably be cheaper to get one new.

So, it's the same cage fan, but the cyclone got all the chaff out of the stream and I went from cleaning it every week to...well, never! Just had to dump the collector bucket.


And it is Propane. I did add an gas extension so you could hide the tank under whatever stand you sat this one. The original line was quite short.
OP
G