For some people, coffee is considered as one of the drinks are bad for health because coffee contains a chemical compound called Caffeine. That statement is not entirely wrong, but keep in mind, when coffee is consumed in the proper way, instead of coffee will provide good benefits for health. For that I would write the health benefits of coffee.


Caffeine is found in coffee is able to improve blood circulation thereby reducing the risk of disease caused by blockage of blood vessels such as heart attack and stroke.


Parkinson's disease is a disease that is commonly encountered by men over the age of 40 years. A study says caffeine is one of the chemicals that can increase the neurotransmitter dopamine in the nervous system.


In a study by the University of California at Los Angeles (UCLA) found that caffeine will increase the plasma levels of sex hormone binding globulin (SHBG), which controls the biological activity of sex hormones (testosterone and estrogen).


In a study conducted by Harvard University found that coffee may lower the risk of kidney stones by 25%. In several studies conducted by other teams also draw upon mentioning thing about coffee for kidneys.


A study conducted in 2009 found that people who consumed normal amounts of coffee reduce risk of Alzheimer's disease, a disease that weakens the memory in the brain.


A study published in the journal Cell Metabolism found that caffeine actually has a good effect on the DNA molecule and muscle. And this positive effect will quickly be felt when juxtaposed with regular exercise and regular.


Good For The Skin


Drinking coffee may help to ward off skin cancer. A study in the journal Cancer Research that specifically examines the caffeine in coffee is a key element to say that coffee drinkers have a lower risk against attacks Basal Cell Carcinoma is a type of skin cancer most often affects men.


In a study published by the Archives of Internal Medicine in 2011 stated that, women who consumed 3 cups of coffee a day, lower the risk of depression by 15%. This was due to the caffeine content of coffee. However, caffeine will be working when coffee is consumed without using sugar in large numbers.


One study found that coffee is far more effective than water in terms of speeding up the process of recovering from intestinal surgery, in particular colon.


Caffeine has a mechanism of action that can defeat the function of adenosine in the body. Adenosine itself is a compound in the brain that makes people sleepy. Caffeine is contained in coffee Adenosine slows down performance that will make your body fresh, eyes wide open, and rapid heart beat.


A researcher named Seimur Damond, MD, of Chicago's Diamond Hadche Clinic says that the caffeine content in coffee can cure headaches. Maybe this is the cause of my frequent headaches if not immediately drink coffee.


Stimulant caffeine can be good on the body. It would make sense to get better performance and increase the rate of metabolism in the body. So no wonder that many important world figures who admit Coffee is one of the important things in the thinking behind their success.

Regarding the 'Overcoming Depression' and 'Headache Prevention' -- Caffeine addiction can actually induce head aches and depression. Some people who miss the morning coffee or their required dose of caffeine can experience symptoms such as tiredness, irritability, headaches, anxiety and even mild depression.
C

Dude if you keep on drinking coffee every day your brain will get addicted to it and you can't wake up from bed without it.
Coffee causes caffeine addiction which is very bad and very hard to solve.
If anybody is seeing this please do not trust this guy too much coffee is not good.
Coffee is not drunk for health it is for pleasure.
M

I am still doing my research but it seem that accusations about coffee being bad for you back in the day did not take into account that the people they tested for the effects of coffee also smoked, but new science says that coffee is helpful after you remove the harmful substances that will in turn cause you harm. This can be done by simply using a filter, but i guess that is bad news for those who drink straight from the french press or Espresso.
Last edited by a moderator: Jul 30, 2014
M

I agree that drinking too much is not good for you, but that is with anything. Recent studies just don't support that one or two a day will harm you.
Last edited by a moderator: Jul 30, 2014
J

Everybody says something else, every study comes to another conclusion.
I think one should drink coffee in a balanced way and see how the body reacts, eg after drinking a lot of it or after a long time again... As far as one has a good feeling everything is alright and nobody should have a bad conscience for not drinking coffee as some people say it definitely increases your health conditions.
C

I believe certain coffee is okay to drink throughout the day depending what kind of coffee you drink. The coffee I drink is acid free and organic, so it's healthier to drink. It's called Tylers Coffee.
C

JoCo said:
Everybody says something else, every study comes to another conclusion.
I think one should drink coffee in a balanced way and see how the body reacts, eg after drinking a lot of it or after a long time again... As far as one has a good feeling everything is alright and nobody should have a bad conscience for not drinking coffee as some people say it definitely increases your health conditions.
Click to expand...

Sometimes, when something works for a person, it does not necessarily holds true (immediately) to others. Some may work for the majority but not everybody. It's important to know your body's needs and limits really.
S

I've also read that drinking 3 to 5 cups of coffee a day may reduce the risk of heart attack and it could also lower your risk of developing type 2 diabetes. however, because it contains caffeine it can also raise blood pressure. So the keypoint here is to drink coffee moderately.

coffeepercolator1 said:
Dude if you keep on drinking coffee every day your brain will get addicted to it and you can't wake up from bed without it.
Coffee causes caffeine addiction which is very bad and very hard to solve.
If anybody is seeing this please do not trust this guy too much coffee is not good.
Coffee is not drunk for health it is for pleasure.
Click to expand...

Good advice. While some coffee/caffeine is good for you, developing a dependency is not good for you psychologically, and it can be bad for you physically. I've known many coworkers and I'm sure you all do too, that cannot function properly without their morning coffee. Coffee is not vital to one's health, as it only serves to give a nice boost / wake up to the human mind and body. That said, there are some interesting studies presented here, and for those who have higher risk factors towards any of the mentioned medical conditions, this is good information to have supporting coffee use to help with managing the condition
C

Well, I believe too much of something can be bad. Drinking coffee is not bad for your health nor can be a bad addiction if you take it moderately. Coffee can boosts you out in a lazy mood. I think you just have to be careful with how much your're drinking so it won't be bad for you.
J

wow,the effective and helpfull health tips with coffee.Thank you for sharing
C

Thanks for sharing! It's good to know that coffee do have lots of health benefits.
H

Great advice, this is useful information for us. Thank you!
S

And let's not forget this benefit.
(Kidding, of course. I get plenty of smart things done too) 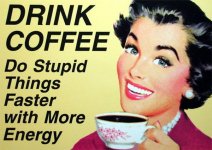 You must log in or register to reply here.

H
Is coffee good or bad for my health?